Bitch Challenge and Runner up to Best of Breed.

While Sophie has been awarded three Reserve Challenges at Sydney Royal

she was finally awarded Bitch Challenge under a Breed Specialist from

Ireland. This was our third 'Kelanmee' bred bitch to have been awarded the Challenge. 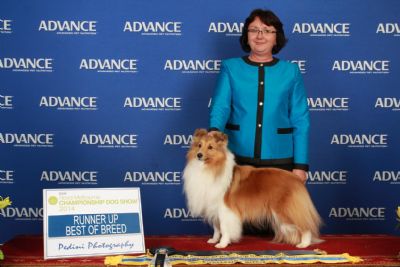 The 2014 Melbourne Royal saw Kelanmee Shetland Sheepdogs once again on the podium! 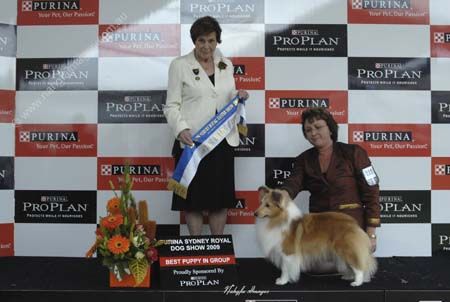 The 2009 Sydney Royal Easter Show will always be remembered as one of the proudest days ever!

Ms E T Heitelahti (Fin) judged Shetland Sheepdogs (70 entries) on Saturday 18 April 2009. On this day she awarded  Charlotte the Puppy Class (7). Charlotte then competed against the other class winners including our own Ch Kelanmee Autumn Aria (6 exhibits in the Intermediate Class).
Charlotte finished the day being awarded Bitch Challenge and Runner Up to Best of Breed.
A 25 point Challenge awarded. This would have been her title under the previous system.

Mrs Heitelahti also judged Puppy of the Day, and Charlotte was given this award.
Charli went through to General Specials on Sunday 19 April and was awarded Best Working Dog Puppy.

Many of our shelties have done well at the Sydney Royal Easter Show
but none as highly awarded as
Charlotte and Sophia in 2009.

One comment I do remember from the Judge "this is excellent breed type - beautiful....."
It has taken 10 years of persistence in trying to 'get it right' and finally we all did!
WELL DONE GIRLS.....just doing it for themselves!