Head refined and elegant with no exaggerations; when viewed from top or side a long, blunt wedge, tapering from ear to nose. Width and depth of skull in proportion to length of skull and muzzle. Whole to be considered in connection with the size of dog.

The characteristic expression is obtained by the perfect balance and combination of skull and foreface, shape, colour and placement of eyes, correct position and carriage of ears.

The character, quality and individual breed type of many dogs is expressed most eloquently in the head properties and this is certainly true of the Sheltie. Continuing the suggestion of symmetry which permeates the breed Standard, the head must be balanced and in proportion to the individual dog. It must be refined, but not fine, and the required wedge-shape, though comparatively long, should be blunt when seen (it must he noted) from the top or from the side.

The Standard lists quite accurately all the individual qualities which contribute to the perfectly balanced head and although it does not appear in the official requirements, the term "one-piece head" suggests the smooth moulding which enables the flat skull, the flat cheeks and the ideal stop to blend with the rounded foreface into a harmonious whole.

Head Properties at a glance 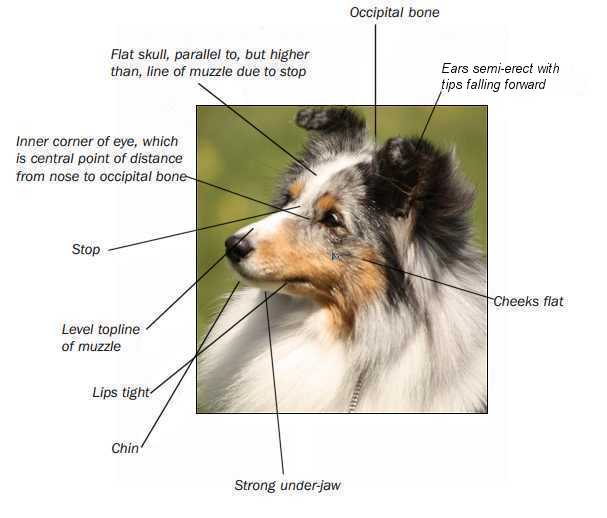 Seen from the side, the flat skull (not too frequently seen) should be absolutely parallel with the topline of the muzzle, but the skull must be on a very slightly higher plane because of the slight rise of the stop. Although slight, the outline of the stop is of course accentuated by the eyebrows. If the stop is too pronounced, the head frequently appears " fashioned" because a deep stop often seems to accompany a broad skull and possibly a dished face (in which the muzzle is slightly higher at the nose than in front of the eyes). If the stop is too slight, the space between the eyes will be filled in, giving a decidedly "foreign" look to the profile and the expression. The skull may appear to recede, and in some cases actually does so, a grave fault.

If the stop is too gradual, starting to rise well in front of the eyes, it will probably spoil the profile of the muzzle which, instead of being perfectly smooth and level throughout its length, may show a dip hollow.

So too little, too much, or an incorrectly placed stop can alter the profile of the head and the expression quite drastically. This applies also to any lumps on the muzzle profile, any dip or droop of the nose-tip, or any bumps on the skull. Any deviation from the smooth parallel lines detract greatly from the type and quality of the profile. Since the underline of the muzzle when seen from the side must also suggest a blunt wedge, there should not be too much depth from the eye down through the back of the jaw, and the under jaw should be reasonably well-developed. If the depth is too great and the under jaw weak, the effect will be sharply triangular rather than a blunt wedge.

As the Standard clearly states, the head should be in proportion to the size of the dog.

The well developed, under jaw, besides completing the wedge, is usually associated with the desired tight lip formation. A weak under jaw, possibly accompanied by inadequate lip formation, tends to reveal the incisors, especially when the dog’s head is raised. This is an unsightly fault.

The markedly overshot jaw (mercifully seldom seen) can go with an over-long muzzle, possibly with a tendency to a roman nose - a very bad and very ugly fault. A level bite causes undue wear on the incisors.

An undershot jaw is a very rare (and serious) fault in a Sheltie, but individually misplaced lower incisors are sometimes seen and are certainly not desirable. Misplaced canines are a very serious fault both from the functional and aesthetic point of view.

Dentition faults (or omissions) appear to be hereditary to some extent, so although few Sheltie judges are likely to be too censorious over a single missing tooth or one very slightly misplaced incisor, breeding plans should not ignore the desirability of complete dentition.

Medium size, obliquely set, almond shape. Dark brown except in the case of merles where one or both may be blue or blue flecked.

The correct eye is adequately described here, but its shape and placement make such a vital contribution to the typical expression that its importance cannot be overemphasised. It is also the ideal complement to the wedge-shaped head into which it fits as though streamlined into position. A large round eye on the other hand does not fit the shape of the head and gives a decidedly faulty expression. Because in the past this type of eye was a common problem, there has been a tendency for a "nice small eye" to be regarded as desirable. This is certainly not the case. A really small eye can give a very hard expression as can a black or light brown eye as opposed to a dark brown one.

The permitted range of eye colour in the blue merle Sheltie is quite wide. Either or both eyes may be dark brown, blue or a combination of blue and brown. The eyes do not have to "match" in colour Two very pale blue eyes can produce a somewhat staring look but are unlikely to be penalised unless the expression produced has an adverse effect on the general appearance. Two darker blue eyes on the other hand can contribute to a very pleasing expression. There is also the rare but beautiful "merle eye" in merles where the eye is brown but with a blue fleck, patches or lights. Any trace of blue in the dark brown eyes of sables or tricolours would be a serious fault.

Small, moderately wide at base, placed fairly close together on top of skull. In repose, thrown back; when alert brought forward and carried semi-erect with tips falling forward.

These standard requirements are reasonably explicit and it should be noted that the ears should be placed FAIRLY close together on top of the skull. While low-set, obliquely carried ears are obviously ugly and faulty, ears that are placed VERY close together can give an uncharacteristically sharp expression. Sheltie ears are NOT required to be "bang on top - practically touching" as sometimes described with misplaced enthusiasm.

In case a change of a single word in the Standard should cause uncertainty, ("falling" has replaced "dropping" forward) it should be mentioned that the ears should curve gently over rather than appearing to drop sharply from a crisp crease. The latter carriage is another feature likely to give a sharp, terrier-like expression. The tips of the ears should point forward and not to the side. Ears, which are placed low on the side of the head, can make the skull look broad, and heavy ears detract from the desired expression.

The character and appeal of the breed, including its essentially sweet, alert yet gentle, expression are so dependent on the ideal combination of the eyes and ears with the head properties, that all the remarks appearing under these headings must really be read and considered as part of a whole.