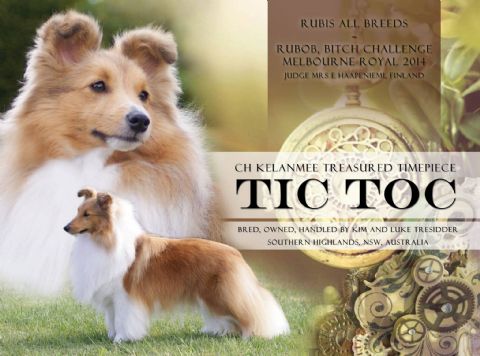 When we collected sperm from our first champion - Ch. Kelanmee Superman 'Clarke' some eight years ago we were always hopeful of using it 'one day'.   Ch. Kelanmee Red Poppy, a proven bitch whose progeny has been extremely successful, was inseminated with Clarke's sperm and the result has been fabulous. Now titled her hourney has been exciting to date. Awarded Runner up to Best in Show in Canberra in 2014 from the puppy class she was awarded Bitch Challenge Runner up to Best of Breed at Melbourne Royal in 2014.

A glorious sable and white she is well balanced, covers the ground easily with her effortless gail just clearing the ground.   Awarded by Judges from Australia and New Zealand, Tic Toc is a multiple class in show winner including Baby, Minor and Puppy at Championship shows. Baby in Show at the QLD Shetland Sheepdog Club and Puppy in Show and Best 18 months bitch at the Shetland Sheepdog Club of NSW in 2014.