This paragraph is self-explanatory. The correct double coat with the furnishing as described, is one of the breed’s chief beauties, while the texture offers maximum weather-resistance. When a dog is in full coat it is virtually impervious to rain. The incorrect soft, fluffy coat, however, will absorb moisture like cotton wool.

The so-called smooth coated specimen was fairly common during the breed’s formative years but is never seen nowadays.

SABLES: Clear or shaded, any colour from pale gold to deep mahogany, in its shade, rich in tone.   Wolf sable and grey undesirable. 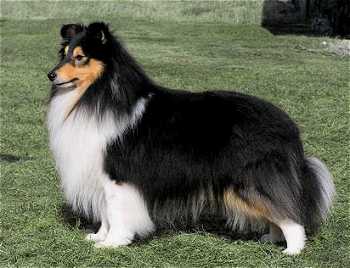 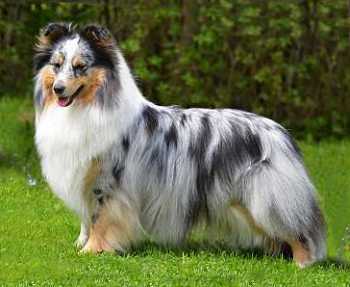 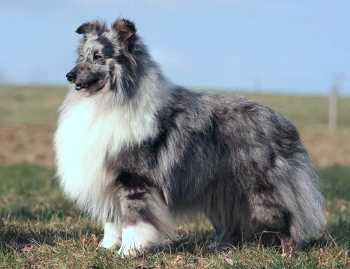 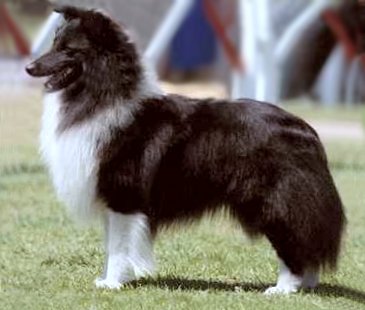 In the case of blue merles the requirements are more specific so present more difficulties to the breeder and to the judge. Blue merles should be blue (not iron grey or mostly black!). As the Standard requires, the blue should be a clear silvery blue splashed or marbled with black. Large black patches are unattractive as is a rusty tinge. A merle does not need to have tan markings but when these occur they should be rich, in which case they contribute a lot to the beauty of a good blue merle. Although colour in merles must always be an important factor, this must be taken into consideration with the whole dog.

In tricolours, the black should be really black (not rusty or "ticked" with white), the rich tan is preferred, but lighter tan not a fault, and the white must be really white

Sables may be all colours from a very pale gold to a dark rich shaded sable and all colours in between. Wolf sables (where there is a greyish hue) are undesirable. So called "wheatens" (an extremely pale sable) are permissible.

Coloured ticking on white legs should not be penalised in any of the colours. Quite understandably, most breeders and judges have their personal preferences as regards colour and (especially) white markings. The only real problem that may arise is if personal preference is allowed to become personal prejudice, and here judges must always be on their guard. However, there are always limits to which markings are acceptable from the point of view of general appearance. The Standard makes it clear that white patches (no matter how small) are not acceptable on the body (i.e. the trunk). A marking that disturbs the general effect of "great beauty" can only be regarded as a handicap, but such prejudices as, e.g. a white blaze, a white strip up the stifle, a dark muzzle on a shaded sable or odd eyes in a merle, must be kept firmly under control when judging. Any departure from the foregoing points should be considered a fault and the seriousness with which the fault should be regarded should be in exact proportion to its degree and its effect upon the health and welfare of the dog.

Male animals should have two apparently normal testicles fully descended into the scrotum.