Above & Below pic at 10 weeks (photo by Penny Brooks) 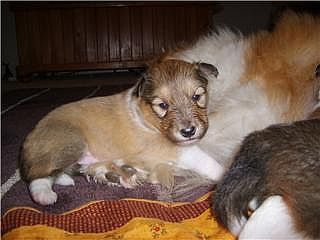 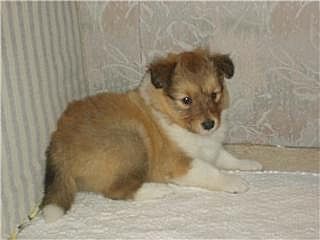 A repeat mating of Sophie and Decker, Charlotte has had a very successful 2009, and 2010 looks great!
Aust. Champion Kelanmee Red Poppy is our 9th Champion Shetland Sheepdog. Her winnings along the way have been pleasurable but none so finest an hour when doing so well at the 2009 Sydney Royal Easter Show (see our Royal Easter show on this site). She followed her Royal campaigns by taking reserve challenge bitch at the 2014 Melbourne Royal to her daugher Ch. Kelanmee Treasured Timepiece. A multiple class in show winner Charlotte possesses true English breed type as do all Kelanmee Shetland Sheepdogs and we are proud of it.  Pointed by specialists and awarded at group level she is now producing quality shelties for our small kennel.  Two outstanding bitches produced by Charlotte are: Ch. Kelanmee Treasured Timepiece (AI) and Ch. Kelanmee Decadent Design who won Puppy in Show at the 2012 Shetland Sheepdog National hosted by the Victorian Shetland Sheepdog Club.